What do conquistadors, captives, pirates and presidents all have in common? They are part of the fascinating and adventurous history of the islands off the Florida gulf coast. Often called the “Buccaneer Coast,” Juan Ponce de Leon first claimed the Sanibel island for the ruling queen of Spain during that time period. Queen Isabella lives on as the namesake for the island now known for being a notorious pirate hideaway. Jose Gaspar’s buried treasure lay hidden in the sands during the early 1800s. His wealth was built from ransoming wealthy families after kidnapping women and holding them prisoner on Captiva Island. Rather than be imprisoned when the U.S. Navy cornered the infamous Gaspar, he flung himself off his vessel and sunk to the bottom of the ocean while wearing heavy chains.

Native American raids proved to be a troublesome hurtle for early settlers, but eventually the island became a haven for influential American leaders such as Thomas Edison, Henry Ford, Teddy Roosevelt, Charles Lindbergh, and more. Anne Marrow Lindenbergh even wrote an acclaimed book of poetry entitled “Gifts from the Sea” while being inspired by the tranquil scenery.

Now Americans and visitors from around the world are drawn to the Florida coast for the beautiful beaches and warm waters, but while visiting the island, it’s recommended to stop and reflect on the past at a few of these interesting places that capture in time the colorful stories of history.

The Sanibel Museum and Village
This was founded in 1984 with the purpose of preserving the history of Sanibel by demonstrating how the people lived in the early years. It is presented in a number of buildings that are furnished and costumed with period accuracy. They include a private house, a school, a post office, a tea room, a packing house and the original Bailey store. Volunteer docents are there to explain the history of each building. You can either join a guided tour or self-tour. The Museum and Village is located on Dunlop Road by the BigArts facility and is open Tuesday thru Saturday from 10:00 AM thru 4:00 PM. There is an entrance fee of $10.00 and children are free. 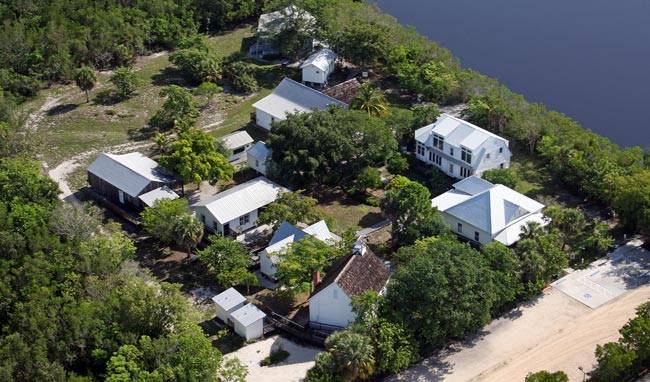 The Sanibel Lighthouse and Park
The lighthouse is located on the eastern tip of Sanibel. It’s 120 years old and is in a 32 acre park that includes the lighthouse and dwelling cottages built for the original keepers. There is also Lighthouse Beach, which is the best shelling beach on the island, a fishing pier, picnic area and showers. The public can visit the dwelling cottages but not the lighthouse. It’s empty except for 90 feet of stairs leading up to the light. The park is open from 7:00 AM thru 7:00 PM and has a $2.00 per hour parking fee.

The Edison and Ford Winter Estates
Thomas Edison and Henry Ford were next door neighbors in Fort Myers during the winter months. Their homes are available to the public to visit along with a botanical garden, a museum and Edison’s laboratories. There are guided tours every hour during which volunteer docents explain the various activities in which these accomplished men became engaged – very unusual, interesting and surprising. It is on McGregor Boulevard in Fort Myers and open daily from 9:00 AM thru 5:30 PM PM. There is an entrance fee of $20.00 for adults and $11.00 for children.

The Calusa Heritage Trail
The Calusa Indians were once the most powerful people in Southwest Florida. They were water people and roamed the waters for fish and shells. They used the shells as tools, jewelry or shrines which usually took the form of shell mounds. The shell mounds are all that remains of their culture. They died out in the late 1700’s as the result of raids from enemy tribes and disease brought in by the French and Spanish. This history is covered in some detail at the Randall Research Center on Pine Island. It is 62 acres in the Pineland Archaeological Site on the western shore of Pine Island. It is open daily from 10:00 AM thru 4:00 PM. There are self-guided or guided tours. The entrance fee is $7.00 for adults, $5.00 for seniors or $4.00 for children.

Visit Captival Island Historical Society
Founded by Stella Farwell in 2011, and firmly established in 2011, the non-profit is committed to preserving the island heritage and giving back to the community. Check out their exhibit constructed inside the recreation of a mailing boat at their location on Captiva Island, or visit their website for more information on events. Call: 239-472-2323.

The Koreshan State Historic Site
The Koreshans, founded by Dr. Cyrus Teed, were called the Koreshan Unity. They believed that our universe exists within a hollow sphere and that our life should be communal and utopian. They had short-lived colonies in Chicago, San Francisco and New York. In 1894 they left New York for Estero, Florida, to found the New Jerusalem. In 1961, as the size of that colony declined, the land was donated to the State of Florida and is now a state park of 135 acres by the Estero River. It includes a campground, canoeing on the river, fishing and picnicking. It’s located at the junction of US 41 and Corkscrew Road and is open all year, daily, from 8:00 AM to 5:00 PM or sunset. The entrance fee is $5.00 per vehicle of 2 to 8 people or $4.00 for single occupant vehicle.